HD gaming comes with a lot of questions about hardware and software, the main one being the choice of a gaming graphics card. The Radeon RX 580 sits at the top of AMD’s 500 series, which is the previous generation of gaming GPUs.

My first HD graphics card was a budget option, and it was a disappointment. It could only play certain games in full HD, and not on full settings with steady frame rates. So, the next time, I got a high-end gaming Graphics Processing Unit (GPU). It worked like a charm, but I quickly realized that most of what I’d paid for was stuff that almost no games or other software use. So I eventually switched to a mid-range option, and I was happy.

If your story is similar, or you’re new to graphics cards, I’m glad you’re looking into the RX 580. It’s a popular mid-range HD gaming GPU that you’re likely to enjoy a lot.

Things to Know Before Buying a Gaming Graphics Card

Gaming graphics cards belong in the dedicated video card category. Integrated graphics cards are part of the computer’s CPU. They don’t have their own RAM and can’t be as powerful, and they often suffer due to lack of sufficient fan cooling. Their advantages are that they’re cheap and don’t use much power. You usually only find them in laptops. And while there are gaming laptops, the term “gaming graphics card” refers to dedicated graphics cards that you buy for a desktop PC. These video cards have their own onboard Random Access Memory (RAM) and powerful fans that keep them from overheating. If you use two monitors or play games at very high settings, the card can get very hot and may sustain damage or lose performance. Because of this, a strong fan is essential.

The RX 580 is one of the top graphics cards in AMD’s mid-range 500 series. It’s suitable for full HD gaming and virtual reality, and it’s popular among cryptocurrency miners. It’s not the newest or fanciest option. But the RX 580 can still deliver good graphics on many recent games.

These are the specifications for the original AMD Radeon RX 580. Graphics card specifications can vary a bit depending on which edition and which manufacturer you go with. It’s a solid upgrade from its older sibling, the RX 480, with faster clock speeds and refined technology. If you’re wondering what stream processors are, they’re like the workforce of the GPU. Stream processing simplifies parallel processing of data. They divide tasks between them, crunching numbers and producing graphics. The RX 580 specs are powerful for a mid-range card. If you get the 8GB version, you’ll have a great HD gaming experience.

As interesting as hardware details may be to some, performance is what really matters. So let’s look at how the RX 580 handles a few popular games.

Doom is a good place to start. Although the game’s content isn’t very pleasant-looking, the graphics can impress. With an RX 580, you can expect 1080p with high frame rates and no micro-stutter. At 1440p, it’s very sharp but somewhat slower, although it’s still fast enough for enjoyable gaming. If you try it in 4K, the card won’t keep up too well. Busy parts of the game will lag and grind on ultra settings. But if you lower them, you can get decent 4K Doom gameplay.

Middle-Earth, Shadow of War is a similar story. You can max the settings out in 1080p and still get smooth, fast performance. 1440p works, and it’s fast if you use lower settings. 4K works, but it’ll slow down when your screen gets busy unless you lower the settings.

Hitman is another good benchmark and optimized for AMD graphics cards like the RX 580. You can run it on the highest settings in 1440p without problems, although it may be smoother with lower settings. It runs well in 4K with high settings, but it’ll get slow at busy moments.

The Witcher 3 will be smooth and beautiful in both 1080p and 1440p. When it comes to 4K, you can still play it comfortably, but it does struggle at times.

While it’s not suitable for playing the newest games in 4K, it’s a formidable and versatile gaming graphics card. For more information on performance with different games and programs, look here.

Popular positive reports revolve around smooth performance, low fan noise, and good value. The main complaints are about 4K performance. Customers give this version a 4.2 out of 5-star rating.

Prices range from $200 to $400. You can buy it from AMD and various computer component vendors. Check it out here.

With so many GPUs to choose from, it can be hard to tell if the RX 580 is the best gaming GPU for you. So let’s compare it to a few key competitors. We’ve chosen the MSI GeForce GTX 970, Sapphire Radeon R9 290X, and Nvidia GeForce GTX 1060.

The reviews and comparisons presented here are the results of analysis of benchmark tests and user experiences from the web. Most information comes from User benchmarks and Amazon customer reviews.

The GTX 970 was one of the graphics cards AMD tried to rival with their RX 580. It’s been one of the most popular gaming graphics cards for some time, and it’s packed full of power. While not as commonly considered a direct rival as the GTX 1060, it’s comparable to the RX 580.

These are the specifications for the original Nvidia Geforce GTX 970. The primary things to note are the lower clock speeds and RAM. While the Maxwell architecture is no longer a feature of new GeForce cards, it’s still powerful, and it was the popular standard for some time. If you’re less familiar with graphics cards and their components, it’s worth explaining the CUDA cores. These are the equivalent of AMD’s stream processors. Comparing stream processor and CUDA core counts may give a false impression that there’s less processing power, but they’re more complex than that.

One common method of testing and comparing graphics cards is by using specific benchmark programs that produce complex graphics. In the popular Peak Overclocked Bench parallax test, the RX 580 produced much finer texture detail. However, MRender favored the GTX 970, but only slightly.

Now for some popular games. The RX 580 outperforms the GTX 970 in most games. You can expect solid frame rates from the RX 580 for games like The Witcher 3 and GTA V, whereas the GTX 970 struggles to give you smooth gameplay on Max settings. You’ll also notice smaller advantages, around 10-15 percent, with games like PUBg and Battlefield 1. It’s also more suitable for World of Warcraft and DOTA 2. While there are games where the GTX 970 has an advantage, such as League of Legends and Fortnite, both GPUs produce very high frame rates.

Users like its stability and overall performance. What they don’t like is that it struggles with some newer games. They give this version a 4.5-star rating.

It’s in the same general price range, from around $200 up to $300 depending on the version. Check it out here. 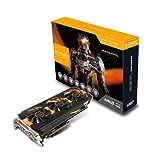 The Radeon R9 290 is a bit older, but it’s a high-end graphics card so it can still compete with cards like the RX 580. It uses the Hawaii PRO architecture rather than the RX 580’s Polaris.

The clock speeds aren’t too impressive, and it has less RAM and lower computing power. That’s not to say it doesn’t perform well.

We’ll use the same benchmarks for this card as well. Starting with the Peak Overclocked Bench tests, the RX 580 has a clear advantage in general. Frame rates are significantly higher, and the results are better. It produced 16 percent more detail in Parallax, 21 percent faster multi-rendering for MRender, and 31 percent faster peak NBody calculation in Gravity. Splatting was the only test where the R9 290 won, with 30 percent faster peak complex splatting.

When it comes to the typical gaming tests, the RX 580 won as well. Games like CS GO, Overwatch, and Battlefield 1 run smoothly on the RX 580 on max settings. The R9 290, on the other hand, barely scrapes by. Its FPS gets down to just above 40 with certain games, such as The Witcher 3, GTA V, and World of Warcraft. It’s still capable of running those games with high settings, even in 1440p in many cases. While it can pull off some 4K graphics, it can’t handle many games in 4K resolution.

The R9 290 only scores a 62 percent average bench. It’s not as popular as the RX 580 either. However, it’s a decent gaming GPU overall.

Users like its detailed graphics and mining capabilities, but some dislike how hot and loud it can get. They give this version a 4.1-star average rating.

Here’s what many consider the quintessential modern HD gaming graphics card. The Nvidia GTX 1060 is somewhat of a gold standard to which people compare most graphics cards. It’s also the most direct competitor to the RX 580.

Somewhat higher clock speeds but lower computing power make it about equal to the RX 580 in general, although it may be a slightly more powerful design. Its Pascal architecture provides excellent efficiency and performance. However, the two extra gigabytes give the RX 580 a slight edge when it comes to detail, at least in theory.

This is a tough head-to-head battle because the two are very similar in performance. The main divider is that the GTX 1060 is more power-efficient and a little better for virtual reality purposes. When it comes to the lesser version of each card, the 4GB RX 580 comes out on top. The three gigabytes of the lower-spec GTX 1060 just aren’t enough for many new games. But this comparison will focus on the high-spec versions.

AMD still beats Nvidia in the Parallax test by far, while the reverse is true for the Splatting test. In general, they’re about equal.

When it comes to games, each has its advantages. The GTX 1060 will have an ever so slight edge with most games. In League of Legends and Fortnite, it has a significant framerate advantage, almost 20 percent in 1080p with maximum settings. However, the RX 580 does slightly better with World of Warcraft and The Witcher 3. Both cards will do well in 1440p on most games at ultra or near-ultra settings.

The GTX 1060 gets an average bench of 71.6 percent, which gives it a slight edge. It’s the more popular choice, but this could also be because it’s existed longer. This should also make the RX 580 a bit more future-proof.

Users like its VR performance and smooth gaming results. The main complaint is about driver issues. They give this version a 4.4-star average.

Prices have fluctuated due to its popularity as a cryptocurrency mining processor. You’ll find it for between $250 and $400. Check it out here.

Now that we’ve covered all the technical stuff and comparisons, it’s time to examine the strengths and weaknesses of the RX 580.

If you're happy with smooth full HD and decent 1440p gaming, the RX 580 is an excellent choice. This is true for AMD-based gaming rigs in particular.

All in all the Radeon RX 580 is a formidable gaming graphics card. It’s got plenty of memory and processing power for smooth 1080p,1440p, and even 4K for a variety of popular titles. It stands up well to its competitors, and it’s decently future-proof. So, if you want a good mid-range HD gaming graphics card, the RX 580 is a solid choice.

It deserves its 4.2-star rating. You can find good deals here.

SD Card Readers: The Best Brands in the Market