The Blue Yeti microphone is hands-down the best USB microphone on the market. Used by thousands for podcasts, streaming, voice over work, interviews, and audio blogs, the sound is crisp and clear.

The controls are simple to understand, and the unit is plug-and-play. It will work with any recording software, and it looks good on your desk. The fact that you get all this quality for a lower price tag makes it that much sweeter.

The Blue Yeti is the midrange model in the Blue microphone roster. You'll find it available in silver, white, black, or "cool gray."

If you only plan to use it for recording vocals, you can also get the Blue Yeti Studio model for a bit more. It only comes in silver, but includes both recording software and studio vocal effects.

The first two features of the Blue Yeti you'll appreciate are evident before you even open the box. The first is the box itself. 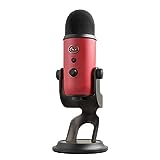 Blue Yeti USB Mic for Recording and Streaming on PC and Mac, Blue...
Buy on Amazon

The outside of the box contains graphic representations of recording situations appropriate to all the microphone's settings, along with the mic adjustments you need to make for them. (Shown in cartoon form for multi-lingual consideration.)

The next thing you'll notice about the Blue Yeti before you take it out of the box is the heft. Blue built the Yeti to last, with the microphone and stand constructed entirely out of metal, except for the knobs and buttons.

Now that you have it out of the box, the next thing that strikes you is the solid, professional-looking metal base. In addition to its weight, it has non-skid rubber pads that ring the base at a width of over an inch.

These pads form a surface that provides a noise dampening "donut" between your mic and whatever it sits on. When you set it in your vocal “sweet spot,” it won’t slide away if you accidentally bump it or your desk. You'll also note the damping pads between the base and the Blue Yeti itself.

At this price, you might think that they have skimped somewhere. So far, except for the plastic knobs and buttons, we can’t see anything that has been done even remotely on the cheap. However, the knobs are made of cheap plastic and don’t have the solid feel you might expect when comparing it to the rest of the unit.

Wow -- no matter which version of the Blue Yeti you prefer, the look is classic and stylish at the same time. The “Blue” logo branding badge on the front not only remains subtle but adds to the classic look of the unit.

The letters and an oval ring surrounding the logo, as well as the ring connecting the mic to the mic screen, are finished with reflective chrome. This gives it a real Golden Age of Radio feel without crossing over into self-parody.

Just like some cars look fast even when they are sitting still, when the Blue Yeti is sitting on your desk or table, it conveys the feeling that something important is about to happen.

The Blue Yeti features a standard 3.5mm headphone jack that includes real-time monitoring. This gives you the ability to hear yourself through the headphones in real-time. It will sound just like it will after transferring to media or sent out to broadcast.

On the back of the Yeti, you'll see the gain and pattern knobs. The Blue Yeti comes with four separate capture patterns to accommodate different recording situations.

While some microphones traditionally feature either Cardioid, Stereo, or Omni-directional, the Blue Yeti configures to each of these settings, plus one more, for maximum adaptability to any recording situation.

Also located on the back of the Blue Yeti, just above the pattern knob, you'll find the gain adjustment knob. This knob adjusts the level of the mic. Note that it's easier to cleanly boost the volume of a quiet recording than it is to lower the sound of one that was recorded too hot.

Generally speaking, the louder recording will be somewhat distorted. And unfortunately, you can fix this distortion by lowering the volume level on the recording. However, you can monitor your volume level and distortion by using the provided headphone jack. That way, you can test your levels before recording. Not generally found on lesser USB microphones, the Blue Yeti includes a gain knob for superior control over your recordings.

The volume for the headphones is easily controllable by the knob in the front of the Blue Yeti. It is, happily, much easier to turn than the pattern knob. The mute button, placed directly above the volume knob, has an LED light to let you know when the mic is hot and you're on the air.

The biggest issue we find with the Blue Yeti seems to be the pattern and gain adjustment knobs. Both seem short and flat. These knobs, with very little to grab hold of, means changing the pattern setting requires quite a bit of force.

All the knobs feature ridges, but their tight profile still makes it a bit frustrating to turn. We found ourselves having to hold the mic with the left-hand so we could apply significant force to the knob with the right without tipping it over.

Fortunately, once you find your levels and adjust the mic pattern to accommodate the people placed around the mic, you don’t have to do anything else with them.

The USB to Mini-B connection

The USB port is typical type-A to Mini-B connection. You may consider this a bit of a drawback because Mini-B connectors have fallen out of favor.

While the cable provided with the Blue Yeti is thick and sturdy, if you can’t find it, you may have to look long and hard to find a replacement lying around your house.

The Micro-B connectors became the connector of choice with Android cell phone manufacturers around 2007. Fear not, however, Amazon and many other retailers still stock enough that you won’t be down for long.

Setting up and Recording with the Blue Yeti

The Blue Yeti is a plug-and-play unit and works to perfection on Windows 10. However, when we connected it to the desktop still running Windows 7 in the studio, the results were entirely different.

When connecting it to GoldWave sound recording and editing software, we could configure it to accept the mic, but the results were horrible. The playback sounded jerky, squeaky, and way too fast. Kind of like the aliens at the end of Simcopter. No matter what mic settings or software we used, we got the same results.

However, if you're running Windows 10, it sets up and sounds like a dream. After you connect it to the USB port, Windows 10 automatically activates and configures the drivers. All you have to do is check to see that your Blue Yeti is set it as your primary recording device, and you're all set. We did a few mic checks, and everything worked fine.

It’s beautiful, versatile and easy to set up and use, but if it doesn’t deliver where the sound quality is concerned, it’s just a very fancy decoration. Well, good news! The Blue Yeti delivers as promised when it comes to sound quality, setting up for different situations, and ease of use under fire.

Because we use ours mainly for voice work, we tend to stay in Cardioid mode. It keeps voices sounding deep, clean, and natural.

We've had occasions to use all the other pattern modes at one time or another and have found them to be equally superb for the given situations. When doing a one-on-one interview, both voices were clean and distinct, with no difference in either volume or tone.

During a group discussion in Omni-directional mode, all five people involved could be heard and understood equally and distinctly. The stereo mode gave distinct separation with no more crosstalk that you would expect in an echo-positive crowd situation.

While we may not use these pattern settings often, when needed, they came through with flying colors. If you find yourself taking on many different kinds of recording situations, The Blue Yeti can handle them all with ease.

Head to Head vs. other microphones

We've gushed a bit about the Blue Yeti. But, how does it compare to other USB microphones on the market?

Even a superb microphone like the Blue Yeti will have its high and low points. Depending on your needs, some of its weaknesses or aspects of its design might make it less than a stellar choice for you.

If you're looking for a high-quality and versatile studio mic for professional recording, look no further. In addition to the excellent sound quality, it delivers in all modes. It adds a touch of style and distinction whether sitting on your studio table or attached to a mic stand. If you use it at a live event, you'll just flat-out look more professional.

Maybe you're just looking for something to replace the built-in microphone on your laptop. Perhaps you've finally decided it’s time to upgrade from the microphone you bought on sale at Radio Shack 18 years ago. Either way, get ready to be blown away.

The sound, the value, and the ease of operation are all excellent with the Blue Yeti. Whether you are Skyping with friends or starting up your own internet radio station, the Blue Yeti has you covered. You may still have a lot to deal with, but sound quality will no longer be on that list.

Asus Monitors: The Best Models for Both General and Gaming Use