The Nvidia GTX 1060 video card is a great mid-range option for gamers looking to add VR titles or other graphically demanding games to their library.

IBM invented the first video card in 1981, known as the Monochrome Display Adapter. This breakthrough creation led the way to modern day state of the art graphics that have come to define many current video games.

Having a good video card can make or break your ability to play a game. Nvidia offers some of the most popular video cards on the market today, and the GTX 1060 Series is no exception.

Larger memory capacity and 3D image rendering make this model incredibly popular for Virtual reality (VR) gamers, as well as a host of other features.

What is a Video Card?

Video cards are a vital part of a gaming setup. Without them, your computer won't be able to render any of the gaming interfaces. Current games demand a lot of visual processing power, and if you don't have the set up to support it, you won't be able to play many of the games hitting the market shortly.

Pixels make up every image on your screen. Current screen resolutions can display over a million pixels, and the processor needs to know where to place every single one of them. The graphics card, also called a video card in some cases, takes binary data supplied from the central processing unit (CPU) and turns it into the picture that displays on the monitor.

To do this, the graphics card takes the binary data to make a wire frame. Then it rasterizes the image to fill in the remaining pixels. In this process, it adds color, lighting, and texture. During most games, the computer does this 60 times each second.

The video card relies on the following components to accomplish this task.

What is the Nvidia GTX 1060 Series Video Card?

The Nvidia GTX 1060 is one of the newer models of video cards offered by the company. The card delivers optimal gaming graphics as a result of combining several technologies. Some of these are Nvidia specific, while others share video cards across the board. 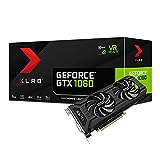 Clock speed describes how quickly a microprocessor can execute instructions. Internal clocks regulate the speed of instruction execution so that it synchronizes well with other parts of the computer. The faster the clock speed, the more it can process each second.

CUDA cores are a Nvidia specific type of processor within the graphics card that enables it to perform required tasks more efficiently. The more cores present, the greater the processing power of the video card.

A memory bus is a type of computer bus. These are essentially data connections between multiple connected devices. The memory bus makes it possible for the video card to connect to the computer's memory. It's used for high-speed data transfer and uses specific controllers to pass on information. This is vital in allowing the video card to access game data that tells it what to display

Not all video cards perform in the same way. Some are higher end and require more power and other computer resources to display game data correctly. Many of them work differently depending on each game's requirements.

Nvidia provides different models for different levels of performance. This is the lowest tier of a graphics card in the lineup. Both the 1070 and 1080 are better performing than the 1060, but they are also more expensive.

Much of the gaming world is making a transition towards virtual reality (VR). VR technology is incredibly demanding on graphics cards, as it has to communicate not only with the monitor but also with the VR vision goggles. The video card has to be able to display the game data so well that users can believe they are living that experience.

VR gaming demands seven times more from the graphics card than traditional games do. This is because the required resolution to operate is much larger and is mapped onto a three-dimensional space. Nvidia created the GTX 1060 to meet these demands, and it is three times more powerful in VR performance than the previous model.

This model of graphics card also increases clock speeds by 30 to 45 percent over the previous one. It also comes with 15 percent more memory clocks and an additional 25 percent CUDA cores. The memory bus is 50 percent wider, and all of this together makes it perform twice as fast as the previous generation.

This model has a base clock speed of 1708 megahertz (MHz, or one million cycles per second), and draws between 120-400 Watts of power. The memory bandwidth has a speed of 8 gigabytes (GB, or gigabits per second). The bandwidth is a measure of how much data can be buffered before being displayed.

The GTX 1060 has 1280 CUDA cores, which are Nvidia technology specific processors. Each of these processors works to translate binary data into the final images you see on your monitor or VR headset. GPUs are vital for rendering 3D images and video. The better the GPU, the higher resolution and the smoother game performance you'll see. GPUs that come on their cards have their own memory, creating more room in which to process game data.

This technology makes it possible to render games at the high rates required by VR titles, or other modern games. Many games require you to use two cards at once, as the graphics display demands are too great for one card to handle.

The GTX 1060 comes with simultaneous multi-projection, which allows you to see multiple images at the same time. This is especially useful in VR when you need to mimic the 3D view people get in real life to create an immersive experience. This is the only way 3D gaming experiences can be delivered.

Before you can install the GTX 1060, you need to make sure your computer set up can support it. After all, a graphics card that performs well won't do you any good if you don't have the hardware to back it up. What you'll need to handle this graphics card is:

Unfortunately, the GTX 1060 won't run on any Apple devices. You'll also have a difficult time installing it in a laptop computer.

The GTX 1060 is easy to use with most modern games, clocking in anywhere from 40-140 frames per second (fps) depending on the graphical demands of the game. However, not everyone has the hardware necessary to include 1060 in their rig.

Assembly time shouldn't take more than about 10 minutes, as long as you follow the instructions laid out in the user guide. All you need to do is disconnect the existing video card, and plug in the new one. We found no complaints with the build quality. Any problems users had with processor power came from its capabilities and not from the onboard hardware.

We took the time to compile the information found on some review sites, such as PC Gamer, individual customer reviews, and Nvidia's site to put together this review.

How the Nvidia GTX 1060 Compares to Other Products

There are a few other options if you aren't ready to pay the price for the Nvidia GTX 1060.

Many people see the AMD Radeon RX 480 as one of the prime competitors for the Nvidia GTX 1060. It offers many of the same features as the GTX and comes at a much cheaper price tag.

Thirty-six computing units and 2304 processors create a 1,120MHz base clock speed. It does have a slightly higher power draw of 150W compared to Nvidia's model.

One of the biggest complaints customers had about the RX 480 is the noisy fan. It relies on a single cooling fan to keep the entire card cold.

It is also a denser arrangement, which could become problematic depending on how you have your gaming computer set up. However, many customers like that the lower specs make it more compatible with their current gaming rig. You're less likely to need to replace other parts in your computer. It also meets the basic specifications for VR setups.

The RX 480 is also not in production anymore, which means it's more expensive to buy now than it was a few years ago.

Like many other graphics cards, the Radeon is simple to install. All you need to do is hook up the display ports and the single HDMI port. Since this is a cheaper model, there's nothing special about the build quality.

It utilizes a basic matte plastic to encapsulate the card but has no backplate. Because it only uses one fan, it creates a lot of noise, which will require you to use an insulated computer case.

If you're seriously concerned about price, the MSI GeForce GTX is a great solution. This card comes it at less than half the price of the GTX 1060.

Many customers are happy with the MSI performance at a lower end power supply. This is one of the favored low profile graphics cards available.

On the downside, some customers complain that it only lasts for a few months.

If you're looking for a card that will run VR games, you can forget the GeForce. The smaller processing power does mean that it offers about half of the FPS as the Nvidia equivalent.

Due to the lower required processing power, this card doesn't need additional power sources. It also runs smoothly and quietly.

Because of the smaller size, the MSI is slightly faster to install than other larger cards. With a cheaper video card, the build quality is going to be much lower.

While the card body is only 7-inches long, the large cooling system makes it take up two slots. Similar to the Nvidia warranty, the MSI warranty covers hardware and software malfunction and not much else.

Compared to AMD and MSI, Nvidia outperforms them in almost every area. The biggest downside to the GTX 1060 is the hefty price tag.

Nvidia's GTX 1060 is one of the higher quality mid-range graphics cards on the market today. Therefore, if you want a card that can beat its performance, you'll have to sell out several hundred more dollars.

Most graphically demanding games will run beautifully on this card. If you're looking for a replacement, and are planning to upgrade your system anyways, the GTX 1060 is one of the best choices available.

We give this a 4.5 out of 5-star rating for the overall performance, ease of use, assembly time that customers seem to love, as well as the warranty coverage.